One of the things I have been doing in the run-up to my retirement, is a photography course aimed at getting up to speed with the Nikon D7100 which I now use. This is not as complicated as trying to understand how a nuclear reactor works or even the interior of a Kray supercomputer, but it’s close. One of the things we have been studying is black-and-white photography, and classic photographers such as Ansel Adams, the American who invented landscape photography. Black-and-white photographs are very difficult to capture with modern  digital SLR cameras and images are never quite as resonant as those taken in the old days with film. I was delighted to receive an email yesterday, from Margaret Carney, former Balmoral Beach Club captain and Manly swimming icon, containing this black-and-white photograph, taken of Margaret at Loreto Kirribilli in 1966. She is being presented with a sporting prize. 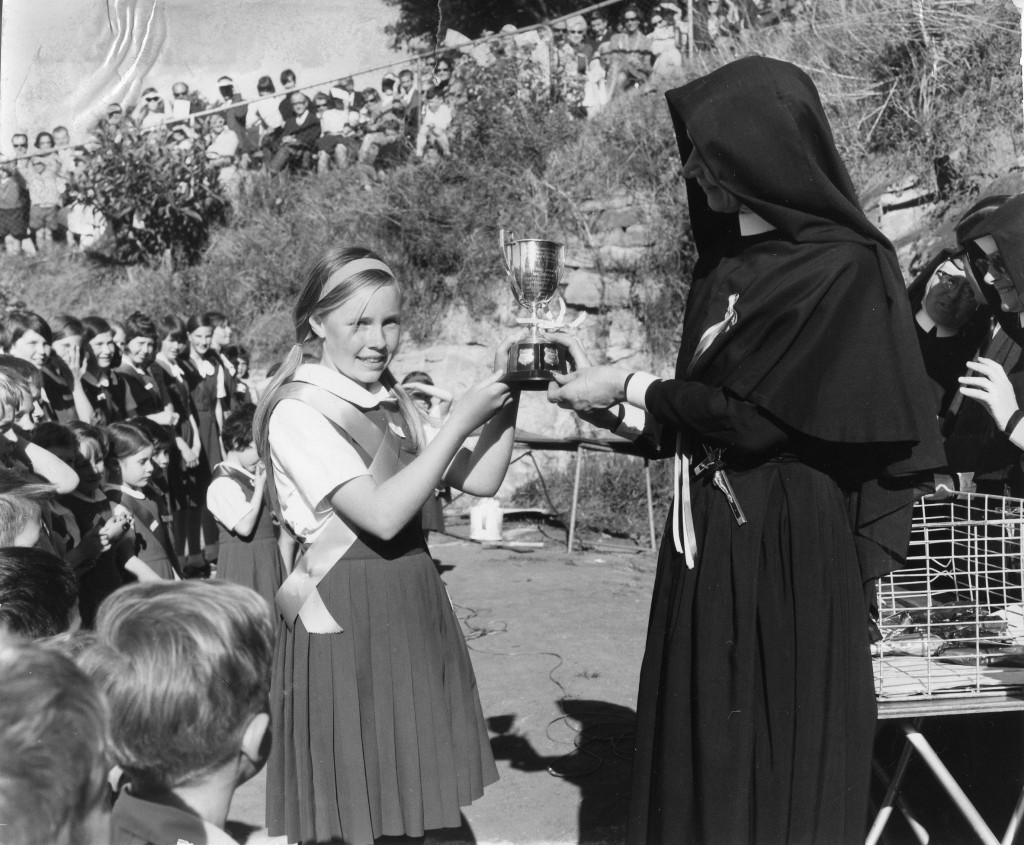 This photograph was taken at 230 in the afternoon, in winter, by a professional photographer. He is standing with his back to the west with the sun coming directly behind him lighting the subject shot.

This is an extraordinary photograph. We would find it difficult to get a shot like this today. Note that the photographer is focused probably on either Margaret’s face or the trophy. Everything in that plane is in focus including the nun’s hands, her habit and her face. The clarity is extraordinary. I have blown this photograph up on my computer and there is not the least amount of pixelation even though I’m looking at only a 2 MB file. The detail around the crucifix is extraordinary, as is the writing on the trophy, which is clearly visible.

The depth of field does not include the boys’ heads in the foreground, which are slightly out of focus and the line of schoolgirls become progressively out of focus as you move into the background. He has achieved a fairly narrow depth of field which pops Margaret, the trophy and the nun out of the background. I imagine this photograph was taken at about F8 with a fairly sharp fast shutter speed, say 1/250. There is not the slightest amount of blur in this photograph. I doubt he would have been using a tripod which suggests a fast shutter speed.

I find the drama and colour of the nun’s habit and the stark black-and-white contrast most arresting. The composition also reminds me of Pieter Bruegel painting of a Dutch village full of people. Note the animated discussion underway between the two nuns in the background, one of whom has her hand raised, completely oblivious to the photographer. The nuns on the right, the line of children on the left and the spectators above, perfectly frame the subject matter, which is Margaret and the nun making the presentation. In fact, the pivotal point of this photograph is the trophy and the rest of the photograph revolves around it. I wonder if he did this on purpose or by accident.

Of historical interest Margaret’s father is sitting in the background at the top of the photograph in a dark jumper. This photograph is 50 years old and was not scanned on a professional flatbed scanner. It’s amazing how it has stood the test of time. 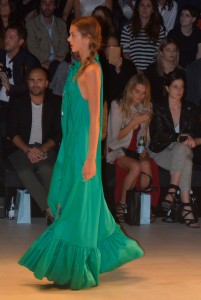 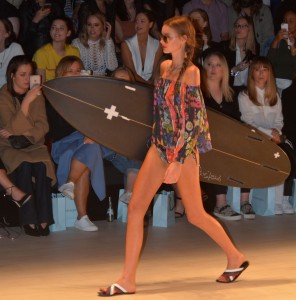 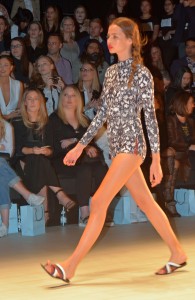 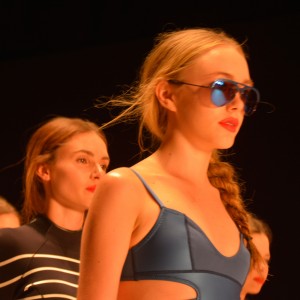 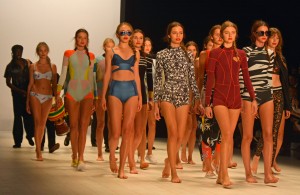 By way of contrast are some photographs I took on Thursday evening at Mercedes-Benz Fashion Week where I was allowed a guest pass as a photographer. This was the runway exhibition of Cynthia Rowley, a designer. I have never attempted this type of photography and found it extremely difficult. I was using a Nikon SB-700 Speedlight, set to automatic and I could not make the shutter speed fast enough to ensure crisp photographs nor the aperture wide enough to get a shallow depth of field. I found this very frustrating as it shows I do not know how to use the camera in flash mode properly. I did not have a power pack on the flash either which is a major impediment and is vital for this type of photography, where rapid multiple flash exposures are required. Also, the spotlights on the catwalk played havoc with the automatic light meter inside the camera. Much to learn. Still, it was a very interesting exercise and I’d like to try again.

I don’t know what this has to do with rehabilitation for a broken leg but it sure was fun.